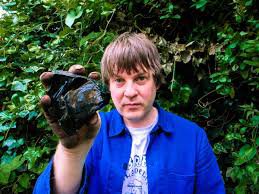 Continuing to carve out a space as one of Britain’s most forward-thinking songwriters, on his latest record Don’t Look Away, Alexander Tucker displays distinctly honest vocals with subtle shifts through unexpected variations. Don’t Look Away contrasts traditional song structure with experimental collage and rich orchestral arrangements. Viewing the album as the final part of a trilogy, alongside Dorwytch (2011) and Third Mouth (2012), Tucker explains, “the composition across these three albums feels like a move away from my earlier records towards something clearer and traditional but still maintaining my love of manipulating source material into new shapes and forms.” Recorded over an extended period in London and mixed in Daniel O’Sullivan’s Dream Lion Studio, Don’t Look Away emerged during a particularly prolific creative period for Tucker. The album finally came together while Tucker was in Zürich composing for the Swiss National Theatre, and while he was establishing Undimensioned, his own comic imprint as an active member of London’s wildly creative independent comic scene. As a result, Tucker’s wider work feels more present here than on previous recordings and this shows itself often in the lyrics, which range from relationships, including the uncomfortable ones we often have with ourselves, to sci-fi imagery and cosmic horror.