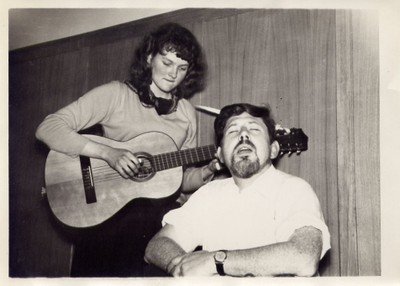 A weekend inspired by Peggy Seeger and Ewan MacColl's innovative BBC Radio Ballads of the 1950s and 1960s. This evening includes a very special performance by Peggy herself.

Peggy Seeger is totally unique. Sister of Pete Seeger (the great-grandfather of USA folk revivial) and partner of the late Ewan MacColl, theorist and practitioner of UK folk revival), she has carved a special niche for herself in both these countries. Trained in both classical and folk music, her experience spans 55 years of performing, travel and songwriting. She'll sing an unaccompanied traditional ballad, follow it with a tall tale about a circus high-diver, then launch into a topical song about drugs, war, hormones, politicians, unions, women, love or ecology. A multi-instrumentalist (piano, guitar, 5-string banjo, autoharp, English concertina and Appalachian dulcimer), she is probably best known for her feminist songs (such as "Gonna Be an Engineer") and for "The Ballad of Springhill", which latter is rapidly becoming regarded as a traditional song.

Born in 1935, she regards herself as "seasoned and in my prime". She has has made 23 solo recordings and has participated in over a hundred recordings with other artists. A native North American, she made her home in England with MacColl for 35 years. She returned to the USA for sixteen years but has returned permanently to the UK where her 3 children and 9 grandchldren live. She regards England as Home.

Recording in the past for Folkways, Rounder Records and Appleseed Recordings, her upcoming projects include: Everything Changes, a new phase in Peggy’s recording, due out September 2014 (Signet Music); and Love Unbidden, a CD, book of love poems and song due out … whenever.

Her concerts are informative, entertaining and skilful, full of sly humour. Audience participation in choruses is routine.

During the 1950s and 1960s, Peggy collaborated with her partner Ewan MacColl and the maverick BBC radio producer Charles Parker to create the Radio Ballads, a series of groundbreaking broadcasts that wove together the voices of ordinary people with music and sound effects into an undulating and totally absorbing whole.

Seeger, MacColl and Parker made and edited hundreds of hours of field recordings telling the stories of a train disaster ("The Ballad of John Axon"), the building of the M1 ("Song of a Road"), polio sufferers and the "psychology of pain" ("The Body Blow"), and other topics documenting the lives of ordinary British people.

Each broadcast conjured its own unique sound world from the distinctive regional tones of its subjects, MacColl's memorable songwriting -- songs like "Shoals of Herring" have become instant classics -- and Seeger's innovative orchestration.

During the weekend we will be exploring the Ballads and their legacy through talks, archive material and contemporary artworks.