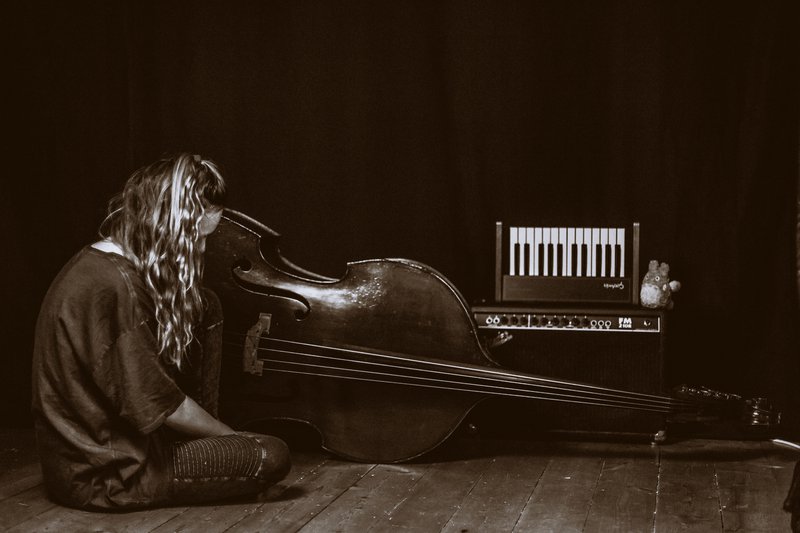 with support from Sandie Middleton

Composing original material for the double bass and voice, her music and technique has both an ethereal and an earthy modernist sound.

Nina Harries studied Classical Double Bass at the Royal College of Music under Enno Sent of the London Sinfonietta, graduating in July 2016.

She is a member of the Akram Khan Company since 2017, performing extensively across the globe in his award-winning solo production, Xenos. In 2019 Nina featured on the EP ‘Love Letters’ by world renowned sitarist Anoushka Shankar, later joining her in live performances at the Southbank Centre, London and in Mumbai and New Delhi in February 2020. Recently, she has joined the band of celebrated platinum artist, British-Georgian singer Katie Melua, for the live release of her 8th studio album; Album No. 8, released in October 2020.

Aside from her diverse ensemble repertoire, Nina is a soloist and songwriter, captivating audiences with original songs and commissions exploring the relationship between the double bass and the female voice. Inspired by western and eastern classical music, dance music and contemporary classical, her work is ethereal, challenging and impossible to pin down into a single genre.

In 2017 she received the PRS Women Make Music Grant in order to record her self-titled, debut album, released in 2019 at Hoxton Hall, London. She is currently working on her second album.

Nina doesn't use socials but this is a great interview

Bristol based pianist Sandie Middleton performs music from her upcoming solo album 'A Murmuration of Starlings'. With sparkling harmonies, swirling textures and sweeping melodies her music is evocative of birds, water and natural and emotional landscapes. Her music weaves together influences of contemporary, classical and atmospheric music.