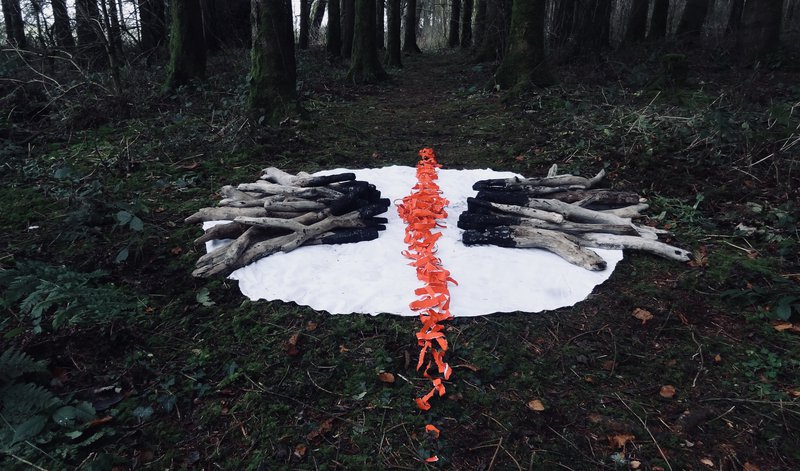 Dark Mountain at The Cube 2020

How We Walk through the Fire

Welcome to Day two of the Dark Mountain Project's weekend at The Cube.

OPENING SESSION
Theatre 10.00-11.30am
Tuning in with Steve Wheeler
Facing the Flames

The world's on fire. The scale of loss and the rapidity of change is hard to comprehend, but it's happening now, in front of us. In this talk and participative performance, Darla Eno and Dougie Strang invite us to explore what, in our lives, in our communities, and in our cultures, we might want to carry through the fire, and what we might be glad to relinquish.

Spring is a great time for getting to know the wild medicine plants in any neighbourhood. We'll start this session in the garden at The Cube, then head out into the streets to connect with plants growing locally, before returning to discuss our encounters. This simple exercise in paying attention to and engaging with the living world right beneath our feet can then be developed, on your own or (more rewardingly) with others. Led by Mark Watson

Hosted by filmmaker Jonny Randall, this is a matinee showcase of short films submitted to the Dark Mountain Project in response to the question 'what might uncivilised filmmaking look and sound like?'. Expect a selection of unique, provocative, and elemental films; with an opportunity to respond to and to discuss the films during the session.

What would it mean to have a more direct connection to the food in our kitchens and on our tables as modern suburban and citydwellers in times of social, climatic and planetary instability? Join Simon Bramwell (co-founder of Extinction Rebellion); Nick Saltmarsh (co-founder of Hodmedods award-winning pioneer plant-based UK food producers); Mark Watson (Dark Mountain core team member, forager and cook) and Bristol's 91 Ways (Uniting the 91 language communities of Bristol through food), for an open discussion on our relationship with food in the 21st Century. Curated by  Mark Watson. Chaired by Charlotte Du Cann

Sarah Nicholls is a fully trained concert pianist who has gone off the traditional rails. Her keen interest in finding and playing sounds ‘inside’ the piano by playing directly on the strings, has led her on a unique path.  After starting to improvise her own music, she began reinventing the shape of the piano and building her own instruments (this year she’s building a lightweight Standing Grand with a team of engineers). Then she began making music about the climate crisis.  This set will be raw and honest, improvisatory and searching, with text interspersed. And it will be the first proper outing of her 2020 album material.

Storyteller Nick Hunt, who has performed at numerous Dark Mountain events, as well as festivals around the UK, tells a mix of traditional tales from around the world and some of his own. Tonight he opens our storytelling session with a new story of uncivilisation.

Unearth the unwritten Blodeuwedd, the Frankenstein of flowers. Captured in the pages of a medieval book, the ancient myth of Blodeuwedd (blod-ae-wuth) describes a woman made out of flowers who was turned into an owl as punishment for adultery. But who was this woman before being confined to the page?

Jo Blake, international contemporary storyteller, irradiates this figure of Celtic myth through word, movement and ritual. The myth is unravelled in this radical reclamation of the untold; intertwined with personal experience and observations of the role of myth in our unmythic modern lives

Jimmy Aldridge and Sid Goldsmith are one of the most celebrated duos to have emerged onto the British folk and acoustic scene in recent years. Their combination of outstanding vocal work, sensitive instrumentation, and a powerful social conscience has brought them widespread critical acclaim. We're delighted they'll be playing a set to round off the day’s programme.

The Cube Bar will remain open till 12 and whilst we can’t sit around the fire as we often do at Dark Mountain events, there will no doubt be opportunities for unprogrammed music, songs, and other interventions!