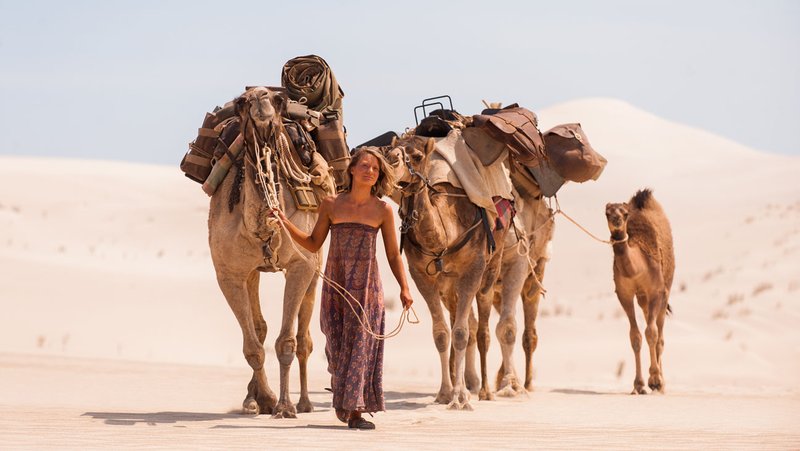 Yearning for solitude and accompanied only by her loyal dog and four unpredictable camels, Tracks tells the story of twenty-something Robyn Davidson's solo trek from Alice Springs to the Indian Ocean in the mid-70s.

When Robyn arrives in Alice Springs she has nothing but her dog and a wild ambition. Her last obstacle is money and Davidson reluctantly agrees to her journey being documented by photographer Rick Smolan and sponsored by National Geographic. Robyn can only see Smolan's visits as intruding on her solitude and compromising everything the journey means to her. However, this uneasy relationship between two very different people would slowly develops into an unlikely and enduring friendship.

In the film, Davidson and Smolan are played by the young up-and-comers Mia Wasikowska and Adam Driver, respectively.

Tracks was shot on film, an increasingly rare choice in contemporary filmmaking. Curran describes the decision as an easy one, having shot all of his previous movies (including 2004’s We Don’t Live Here Anymore and 2010’s Stone) on film, while recognising that Tracks likely represented his last opportunity to do so. The choice also proved stylistically significant.

“Certainly for the look that I was going for, film was the preferred medium,” he says. “As a story that takes place in the ‘70s, I wanted the textures, the feel and the lenses to feel like that period. I wanted to pick a project where a big character of the story was the photography and the landscape.”

The desert is a vivid character in Tracks, and Director John Curran draws on the influence of Australian movies from the era such as Walkabout (Nicolas Roeg 1971) and Wake in Fright (Ted Kotcheff 1971).