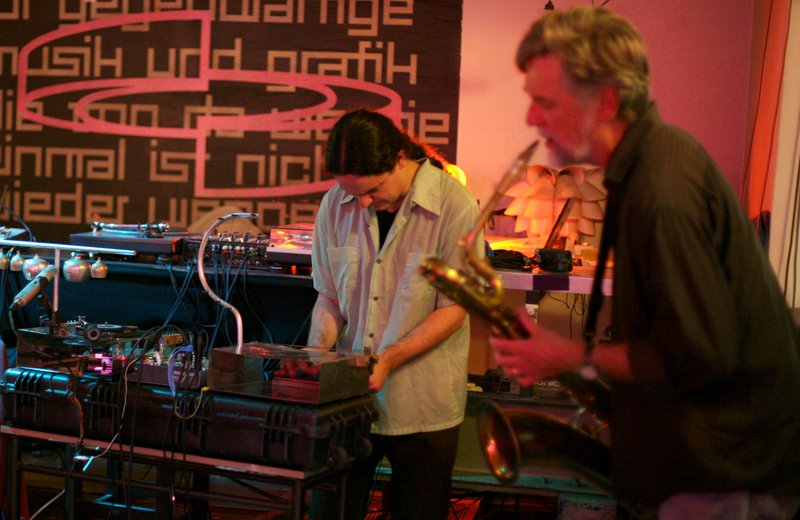 It combines with Simon Rose’s circular breathed baritone/alto, multiphonics and harmonic textures, to explore through real-time interaction. The method of exploration commits to a free improvisation approach where the music is composed at the point of performance. Since meeting in 2010, Stapleton and Rose have performed as a duo in Germany and the UK, and in 2013 and they released their first CD, FAUNA, on the San Diego label pfMENTUM.

Berlin based saxophonist Simon Rose performs solo on alto (Procession, 2005) and baritone (Schmetterling, 2011). He was founder of the well-known trio Badland (with Simon Fell and Steve Noble) and is involved in numerous collaborations. Rose’s recordings can be found on Bruce’s Fingers, Emanem, FMR, PSI, Rayon, Leo, Bug Incision, NotTwo and pfMENTUM. Sound artist, improviser and writer Paul Stapleton designs and performs with a variety of modular metallic sound sculptures, custom made electronics, found objects and electric guitars. Since 2007, Paul has been lecturing at the Sonic Arts Research Centre.

"…like some old, forgotten animal from the beginning of time, silence towers above all the puny world of noise; but as a living animal not an extinct species, it lies in wait and we can still see its broad back sinking ever deeper among the briers and bushes of the world of noise. It is as though this prehistoric creature were gradually sinking into the depths of its own silence. And yet sometimes all of the world today seems like the mere buzzing of insects on the broad back of silence." Max Picard (1989)

Described by radio free midwich as a “musician and improviser of rare talent, writer and co-curator of essential web-resource Bang the Bore”, Seth Cooke’s improvisation utilises the percussive and resonant qualities of a sawn-off stainless steel waste disposal sink alongside assorted electronics and implements. He is also an active field recordist – although it might be more accurate to describe his current activity as non-field recording – and runs the Every Contact Leaves a Trace label. Dom and Seth have been playing together irregularly since January 2013.