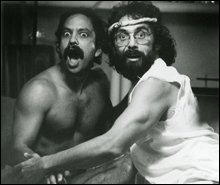 Score yourself some Christmas cheer! As the Heavy
Heads present a screening of a counter culture comedy
classic from the 1970’s. Up in Smoke is the
quintessential stoner comedy and tripped out road
movie. Cheech & Chong provided the blue print for most
American comedy ‘slacker’ duo films from Jay & Silent
Bob to Bill & Ted and Wayne’s World.

Also featured will be a screening of a seasonal
animation written and narrated by one of the great
beat generation writers.

The Heavy Heads Dj’s will be in the bar playing a
selection psychedelic rock and far out sounds.