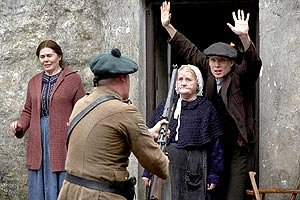 The Wind That Shakes The Barley

(Ken Loach / 2006 / UK / 35mm / 127min / Cert 15)
Legendary British director Ken Loach's latest film takes a long hard look at the anti-British rebellion in 1920s Ireland from the perspective of two brothers torn apart by the conflict. Though, as with most of Loach's output, the film is unashamedly political, the usual traces of polemic are here balanced with true emotional intensity through the exploration of the waxing and waning political ideals of the brothers.
The winner of the coveted Palm D'Or at this years' Cannes Film Festival, The Wind That Shakes The Barley reinforces Ken Loach's position as one of the most important and enduring voices in the often fickle world of British cinema.