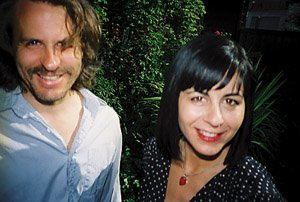 Quasi have history. Not only do Sleater Kinney drummer Janet Weiss and Sam Coomes (known solo as Blues Goblins) share each other's musical lineage, they have also been bound in wedlock; a union that, although long since dissolved, has unlocked an instinctive creative chemistry that trickles through Quasi's music like blood from a crushed heart.

New album on Domino 'When The Going Gets Dark' (produced by legendary Flaming Lips/Mercury Rev/Mogwai man Dave Friedmann) further forsakes the keyboard-led indie grandeur of Quasi past for something more coarse and true: the heartfelt country overtures remain, but there's pesticide on the meadow. They play Bristol in a special three-piece formation featuring Joanna Bolme of Steve Malkmus & The Jicks on bass before heading off to Green Man Festival.

Support from The Corey-Os, a pure-heart-stop-start-noise-nik trio, born from the craving of young hearts and a fervour for connection in a cold, cold world.