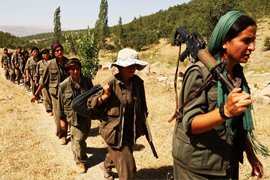 Bakur: Inside the PKK

BAKUR: Inside the PKK is the world's first documentary made with inside access to the Kurdish revolutionary group. Shot in secret, the film shows the daily life of PKK members in their camps in south east Turkey ('North' Kurdistan).

To date, the PKK has lost over 30 thousand of its members in combat against the Turkish State. What is the PKK’s perception of the state, justice and authority? What constitutes the foundation of their relationship to the people? How did the Kurdish movement evolve over the years into a battle for freedom founded on the women’s rights movement? How do the guerrillas who have been living under wartime conditions for 40 years manage to survive all year-round in the harsh outdoor living conditions in the mountains.

The film was criminalized in Turkey and the filmmakers on July 19, 2019, were sentenced to four years and six months in prison charged with disseminating propaganda. They responded to this by saying:  “Any propaganda one can find in this film would be a propaganda for peace.”

Bristol Kurdistan Solidarity is putting on this event to raise awareness about the situation in Bakur and Rojava. If you can please bring any spare money to help raise funds for Heyva Sor, who are the only organisation on the ground in Rojava giving relief and aid to the people of Rojava.

The film will be followed by a Q&A and discussion.

No one turned away because of lack of funds.