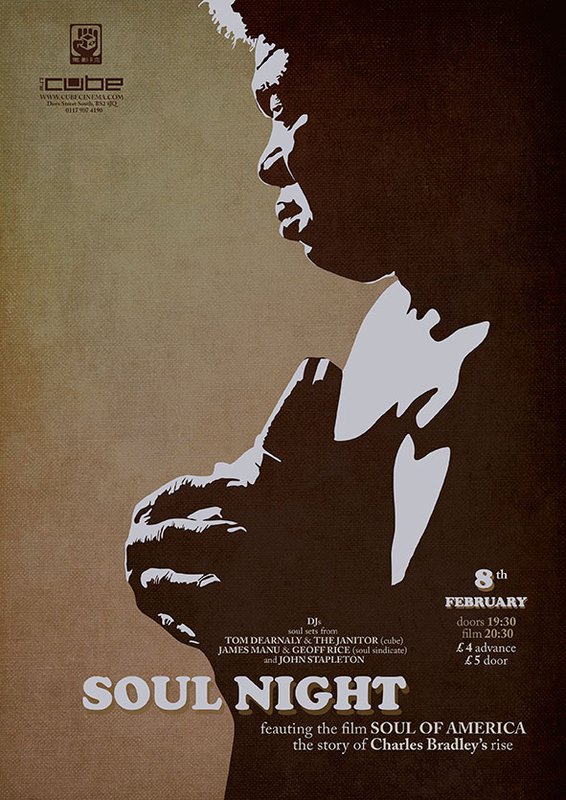 Tonight the cube will host a celebration of Soul music as we play host to 5 DJs as well as showing the film Soul Of America about the life of Charles Bradley. The DJs will be playing some of their favourite soul tunes from the pantheon of  Soul Music. Doors will open at 7.30.

At 8.30 we will be showing our film, The Soul of America (Paull Bien) which is a documentary telling the story of late-flowering 62-year-old soul singer Charles Bradley, whose début album No Time for Dreaming rocketed him from a hard life in the projects to Rolling Stone magazine's top 50 albums of 2011. Abandoned by his mother as a child, Bradley faced homelessness, illiteracy, violence, the murder of his beloved brother and a nearly fatal illness. He worked odd jobs across the country and performed as a James Brown impersonator and, through it all, never gave up on his life-long dream to make it big in the music industry. Spanning the exciting, painful and uncertain months prior to the release of his début album, the film documents one man's ultimate triumph over an impossible dream 48 years in the making.

After the film and from around 10pm until 12 the Cube will remain open and we hope very much you will take this opportunity to celebrate this music with us. The decks will be handed to Geoff Rice who has DJed at some of this country's  best soul ad mod clubs.and James Manu who helps to organise and DJ at Bristol's own Soul Splash. Following these two is John Stapleton a regular face at the Cube whose presence we're glad to have. These 3 look to  entertain you with soul music not just from Brooklyn but New York, Detroit, Memphis and all points between.

While the night is young we invite you to enjoy the evening with us whether you wish to dance, socialise or just chat our doors will be open.