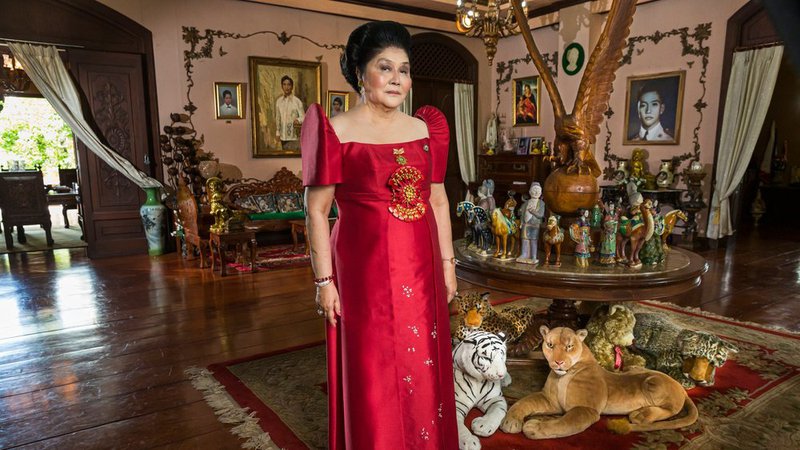 Former First Lady of the Philippines Imelda Marcos – she of the sensational shoe shopping habit and excesses so notorious they led to the spawning of an adjective, “Imeldific” – is the fascinating subject of Lauren Greenfield’s (Generation Wealth, The Queen of Versailles) jaw-dropping new documentary.

It wasn’t just shoes; during her equally kleptocratic husband Ferdinand’s 21-year presidential term, Marcos bought up shops, skyscrapers and generally delighted in spending as much money as she possible in a series of increasingly absurd scenarios. Along with Ferdinand, she is widely considered one of the greatest plunderers in history, stockpiling assets of an estimated $5-10 billion from the Filipino people. Yet despite their breathtaking corruption and the vile brutality of her husband’s regime, which saw him place the country under martial law and dole out torture, she hopes to become the country’s matriarch once more as her son, Bongbong, makes a bid for the vice-presidency.

It’s an acute study of the psychology of power and a portrait of someone with an incredible, almost inviolable, sense of entitlement: “I was always criticised for being excessive, but that is mothering,” she says, referring to her habit of handing out money to those in need, but unable to acknowledge the money wasn’t hers to give. Offering insights into the Philippines’ past and its troubled political present, led by aspiring strongman Rodrigo Duterte, The Kingmaker expands on Greenfield’s (excellent) previous docs exploring the elite and the intimate corruptibility of extreme wealth – here depicting someone with a seemingly inextinguishable hunger not just for money or things, but for power and legacy too.

"It seems at first as if this is going to be simply a black-comic portrait of entitlement, comparable to Greenfield’s 2012 film The Queen of Versailles. Actually, it is more than that: a larger, tragic picture of tyranny and corruption in the Philippines that might stand alongside Josh Oppenheimer’s The Act of Killing (2012) and The Look of Silence (2014) about the repression and slaughter in Indonesia." ***** Guardian