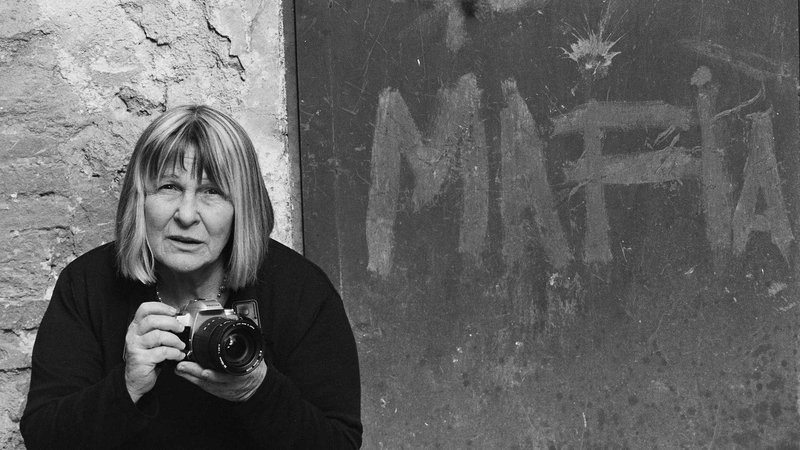 In the streets of Sicily, beautiful, gutsy Letizia Battaglia pointed her camera straight into the heart of the Mafia that surrounded her and began to shoot. The striking, life-threatening photos she took documenting the rule of the Cosa Nostra define her career.

Battaglia was quite the catch. She married young and had children, yet her restless spirit refused to renounce her passions. Breaking with tradition, she devoted herself to photojournalism. Battaglia’s lens was defiant: though her life was in danger she fearlessly captured everyday Sicilian life—from weddings and funerals to the brutal murders of women and children—to tell the narrative of the community she loved that had been forced into silence.

In Shooting the Mafia, filmmaker Kim Longinotto breaks from her vérité past and stunningly weaves together Battaglia’s heart-wrenching black-and-white photographs, rare archival film, and candid conversations with Battaglia herself. This audacious documentary brings grit, texture, and critical new perspective to Battaglia’s work and dismantles the romantic narrative of the Sicilian Mafia from the perspective of someone who lived inside it.

"A meld of portraiture and social history that is as tender, humane and generous as it is harrowing." Sight & Sound

“The Best Movies of the 2019 Sundance Film Festival”  Wrap "Wonderful film. An intimate portrait of Letizia Battaglia, an exceptional woman, whose photography of the chaos sown by the Mafia helped bring change to Sicily.”

Screen International "Longinotto’s tribute to Battaglia is engaging and inspiring"

The Playlist “Some of the most arresting documentary work of the past few decades.”

Little White Lies "A lavish in-depth love letter to Italian photographer and activist Letizia Battaglia... She is always charming and inspirational, living as a strong, independent woman in a crushing patriarchy."