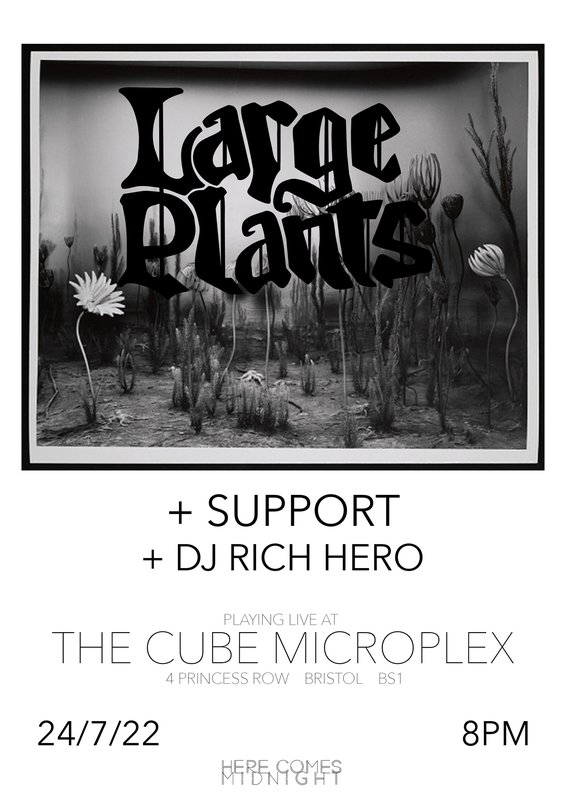 Last time Jack Sharp was at The Cube it was for a gig in 2008 playing with his previous band, psych-folk luminaries, Wolf People. They shared the stage with The Liftmen, alongside Andy Votel and John Stapleton on the decks. What a night!

14 years on, we see Jack back here again, this time with Large Plants, his post-apocalyptic downer-fuzz-rock side project. Suddenly without a band and faced with the enforced lockdown of Summer 2020, Jack, inspired by fuzzy biker-rock, proto-hard-rock and Turkish Psych, created Large Plants in a friends’ old barn in Bedfordshire.

Their first single was described as "A fine slice of haunted (and hauntological) folk-rock" by Uncut, who chose the track for their June cover CD, and the album's picked up a 5 star review from Shindig Magazine. And their unexpected psychedelic cover of Madonna's La Isla Bonita is something you never knew you needed to hear, but you do.

Their recent album launch in London sold out so don't drag your heels on this one, it's sure to be a special show. Support TBA.

DJ Rich Hero is going to be spinning some delectable records to top and tail the night perfectly.

We've added a pay what you can in case you're feeling flush. All extra paid goes towards the artists and The Cube. If you're broke but want to come, drop us an email on herecomesmdnt@gmail.com and we'll try and hook you up, capacity dependent.