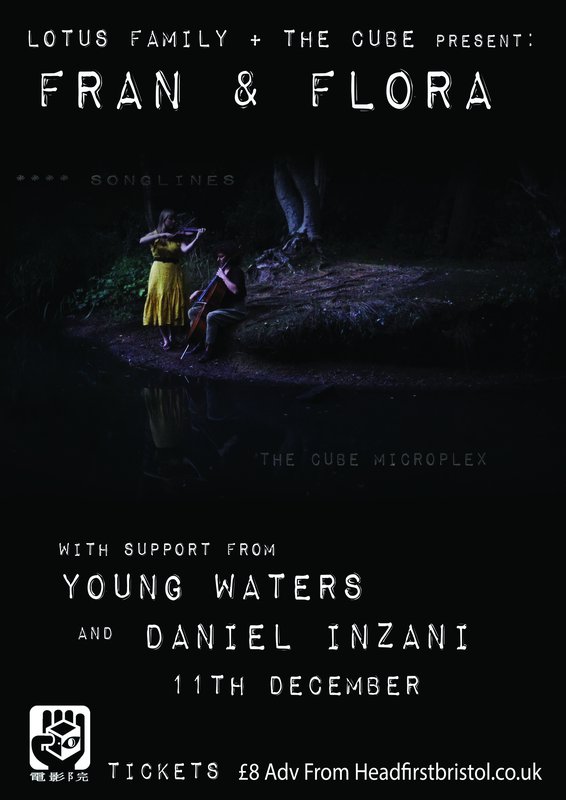 With Support From Young Waters and Daniel Inzani (Spindle Ensamble)

We are extremely honoured to bring you the breath taking Duo, Fran and Flora to Bristol for their Cube début

"It’s all about dynamics. Violinist Flora Curzon and cellist Francesca Ter-Berg take Eastern European / Eurasian folk and infuse it with the quiet-loud sense of post rock exploration that unites the likes of Mogwai and Jambinai." - Mojo

"They’ve contributed to the sound of folk guru Sam Lee, Portico Quartet and, notably, the Neo-prog of Charlie Cawood’s excellent album The Divine Abstract." The Wire

"They have gone to Belgium to work with the brilliant Tcha Limberger and to the Transylvanian village of Beica de Jos near Târgu Mures to study with fiddler Marcel Ramba, half Jewish, half Gypsy. Flora also went to work with violinist Marin Bunea in Chisinâu, Moldova, who played in the excellent Other Europeans band. “Working with musicians like this is not about ‘unlearning’ anything,” she says, “it’s actually the opposite. It makes you realise just how much you’ve got to learn.” - Songlines

Delicately navigating the question of authenticity they've spent years developing a sound which is simultaneously reverent to the traditions they have been studying as well as deeply personal.

Their growing reputation has accelerated since the recent release of their debut album unfurl (Feb 2019) which was produced by Sam Beste from Hejira. They have appeared live in session on BBC4’s Woman's Hour, Cerys Matthews’ 6 Music Show and Gilles Peterson’s Worldwide FM. Along with performances including Kings Place, Cafe Oto, Eastbourne Folk Club, Klezmer In The Park, Shambala Festival, Shtetl Neukeulln (Berlin) and the EFG London Jazz Festival.

Known for being the mind behind Spindle Ensemble and Tezeta Dan will be bringing the Cube piano to life with a rare solo performance of ideas Old and New.