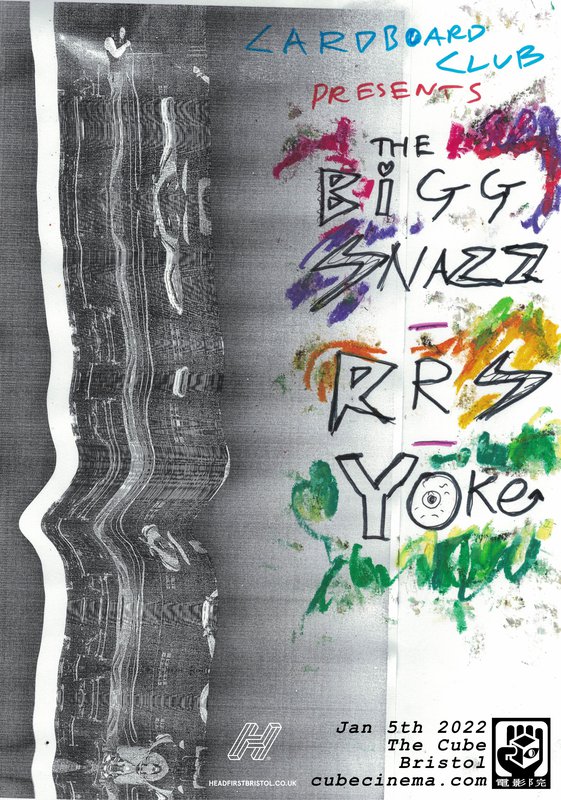 A brand freekin new super group to smash the socks in2 the shit in terms of music. Hilary of Cowtown, basic switches and garbage pail kids will sing the songs of a funky cardboard generation that wanna do silly like a sausage with her very own gob. Speaking of gobs, theo gowans aka territorial gobbing and also a member of the garbage pail kids will be providing melodiez that would make beethoven and the bee geeez sick out of their eyeballs, and the third member of the band rrs, robert ridley-shackleton provides the funky beats and the finger licking bass lines. We have no audio to share with u as this band hasnt been invented yet.

The cardboard prince is here 2 crumble infront of u like the bakewell slice that he is, as rrs is doing two shifts at the cube tonight his solo set may not be as funky, but he wants to give u some new juice that he has been working on, but dont worry im sure it will be snack as fuck. He's gonna go back to the original cardboard clunky hissy junk sound that sounds a little bit like this tape:

Possibly one of THE best formations of free improverz that this sweet city has returns after blowing the champagne out of our ear holes last year at cardboard club. Its comprised of Rebecca Sneddon on sax, Robin Foster on drums, Matthew Grigg on guitar and Joseph Kelly on Double Bass, they r all in tune 2 their tune and its the original mangster tune to make your body shake. When these mangos really start hitting it hard I feel I need something to bite, some chewing gum, a fidget spinner, anything, oh good god cuz my body cant stop churning and gurning, and once they stop u will feel like dairylea